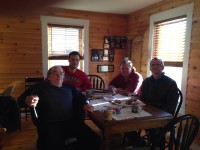 View the breakdown for the contest here:

Recorded the entire contest, but most of it is boring.  Here are a few clips:

Things To Do Differently

1. Better QSO distribution between 10 and 15 meters.  Bounce between CQ frequencies.  Don’t camp out on 10 meters for 5 hours straight.  Its ok to CQ on 15 for a short stint and then go back to 10 meters.  This allows second radio to be on 10 when it is open to EU.
2. Completely tune through 10 meters with single radio when it is open to Europe one time on both days.  Same for 15 meters.  For sure do the same when Caribbean and Africa is coming in, because most of those guys won’t find you.
3. 15 meter antenna on the bluff towards Japan was sorely missed.  JA count was 100 Qs down as a result of using the 7 element at 90′.
4. Don’t post score to live contest site.