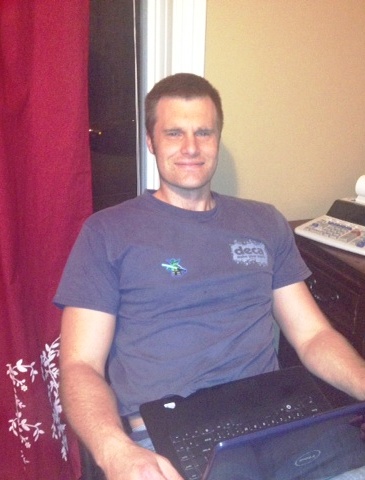 Thanks to N2IC, for helping get some rotor issues related to N1MM ironed out
before the contest. The N1MM program is a great contest logging program and
has a great support staff behind it.

My dad, K5GO, was out of town during this contest and it was really strange
being on the mountain with no one around. My wife and kids came up to the
shack Saturday morning to make me breakfast, which was greatly appreciated
since the cold pizza I brought didn’t sound very appetizing.

The contest did NOT begin well. I fully expected to plop down on 15 meters and run JA for at least 1.5 hours at the start before slogging it out on 20 and 40. That didn’t happen though and the only thing going on 15 was South America.

I’m beginning to believe that any of the major DX contests can be won from here in the single op or multi single categories. However, it can only happen when we have great conditions into Japan on 10 through 40 meters. This year that did not happen. 15 was horrible to Japan during the entire contest and 10 didn’t open until the last hour of the contest, but that opening was only good for a handful of contacts. Other than working JT5DX on 20 and moving him to 40, I do not recall working any real exciting DX in Asia on any of the bands.
80 meters was the real bright spot for this weekend. The band was wide open to Europe both Friday and Saturday night and I worked everything I could hear. We recently cut down a large group of pine trees that had overtaken the 80 meter 4 square. I’m starting to think that the trees may have been sapping our signal on that band. Friday night I tried multiple CQs but never had a response on 80. Saturday I tried operating split and voila, immediate callers. The rate wasn’t anything special but it was good for some Qs and several new multipliers.

The most enjoyable aspect of this contest was finding new multipliers. Findinga new multiplier on the second radio was far more stimulating that running a big pileup of callers. I have fun during multi op contests using packet but that enjoyment doesn’t compare to finding the guys on your own (but of course neither does the score). K4VX knew what he was doing when he turned the packet OFF, even during multi op contests.

Even though I was trounced by W2RE, it was still enjoyable trying to chase him on the score reporting sites. He pulled away Sunday during the European
opening. It is fine if people do not post their scores on the site, but if you don’t want to post your score then don’t be a peeping Tom.

Since the ARRL has U.S. and Canadian scores grouped together, then it seems to me that the Canadian stations should agree to be bound by the same frequency ranges as the U.S. stations. I wonder if the Canadian guys ever had to say, “Is this frequency in use” during the contest?

The contest was very enjoyable and thanks for all of the stations that
graciously moved. Also I greatly appreciate all of the hard work my dad puts
into maintaining and improving the station. It is a full time job.